A few weeks ago, I was asked to play in the “Media Game” at halftime of the Missouri Comets Major Arena Soccer League game. I have a long history with the Missouri Comets, including cheering for them during the 2005-2006 season, so of course I said yes!

However, I wondered if I should’ve told them the full truth. I’ve never played, or attempted to play, soccer in my life. But I figured, cheering for three different soccer teams (high school, MISL and MLS) counts right? 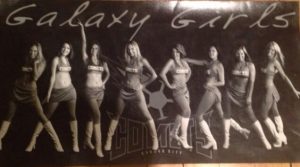 Before the media game began, there were of course several interviews and a group selfie. 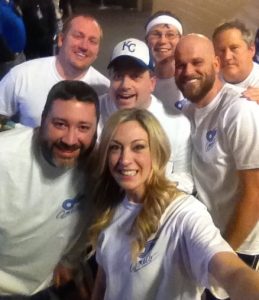 After lots of trash talking and team selfies, my team, Team White (by default to our t-shirt color), completed a pep talk huddle and waited for our moment to take the field.  Once we heard our walkout song, we each ran out. I was poised and ready to go as left forward, confident that I would score a goal for our team.

The referee blew the whistle and our team immediately took possession. I started to run forward, anticipating a pass in my direction. I was prepared, I’d seen it a million times. My teammate would pass to me, I’d pass back and we’d score! I took three steps ready for my big moment when all of a sudden it felt like I hit a brick wall.

A player from the other team totally sideswiped me from out of nowhere. I never even saw it coming.

I realized in that moment, I had two options. Either punk out or put my big girl pants on.

As the sole female on my team, I knew what I had to do.

I shook it off and started running again. By this time, the right forward and middle forward had the ball near the net. There was a pass back from Husted to Weiseman, it got loose, I kicked it back to Weiseman and GOALLLLL!!!!! 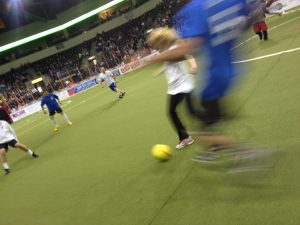 I was so proud of my assist! What a great start! 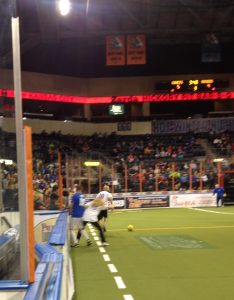 The time clock started ticking. We were running out of time! Yadrich passed to Husted. We got close to the goal again. We shot. Their goalkeeper grabbed it without a flinch. Threw it back out. Team Blue took possession and raced down the field. Team Blue scored.

The score was tied 1-1. And the buzzer dinged. We ended on a tie game! 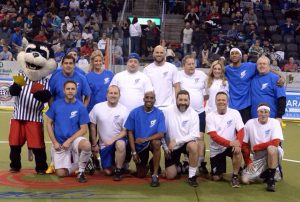 What an awesome experience for my inaugural game playing soccer.

It was also fun to see so many old and new friends. My dear friend Vlatko Andonovski has coached the Comets the last two seasons — to a championship last year and undefeated 9-0 this year. It was great catching up with Vlatko and his wife. It was also great to see in the stands former player Dino Delevski, who was a star player when I cheered for the team.

My good friend and NFL sister Jillian was the on-field reporter, while my friend Steve Serrano was the in-game host. Several of our NFL sisters came to support as well!

I have to admit, I was really nervous to say yes to this adventure. The idea of playing in my first ever soccer game in front of thousands of people was terrifying. But, I’ve learned a lot this year about taking risks and putting yourself out there. I didn’t hit one of my goals of getting a speaking engagement in Canada, but getting to work with Nancy Grace, Anne Burrell and even Jennifer Nettles ain’t too shabby.

I’ve certainly made my fair share of mistakes, but, had I not put myself out there for different opportunities, I wouldn’t be where I am today. So, in saying yes to the game, I’d do it all over again because the outcome was so much greater than letting my fear control my Saturday night. Sometimes you don’t always win, but when you go for that strike and wind up making contact with the ball, the reward is so much greater. I got to connect with old friends, make some new ones and created new memories through it all. 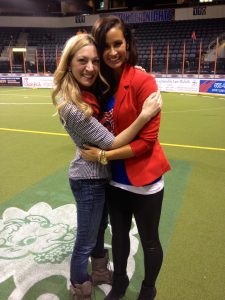 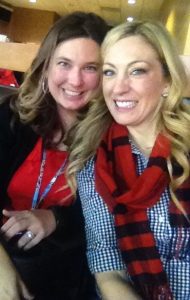 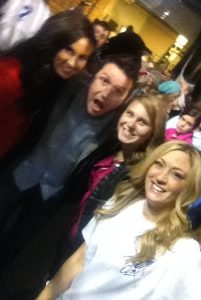 What a way to end the year.

I hope you will consider joining me for JumpStart 2015. I would LOVE to help you find the same bliss and happiness I have found in life…. including taking those scary yet rewarding risks and saying yes to the right opportunities that will help you live a life you love.

Personal Brand More Than How You Look
Scroll to top