If you follow my travels on social media, you know that I just finished up 23 presentations in 21 days across Missouri, Vermont, Massachusetts, New Hampshire, Michigan and New York, and also enjoyed a quick trip over to Barcelona, Spain.

Since I got home, it has taken everything inside of me not to hibernate in my bedroom with my cat and do nothing but sleep.

Luckily for me on Friday, I didn’t and instead, learned a lesson on why I will never stop believing in the power of kindness, no matter the circumstances.

Back in my hometown of Kansas City, this past Friday was sunny and 80 degrees, very unusual for October 28th. Trying to be productive instead of staring at my bed and contemplating a nap, I decided to go wash my car and run a few errands. As I finished up a fantastic car wash (my dad taught me right!) and pulled into the vacuuming stall, all of a sudden I heard the loudest bass music that I hadn’t heard since the pounding music and cheering fans at Arrowhead Stadium.

It was so loud and I was already fighting a terrible headache, I couldn’t think straight to simply count my four quarters for the vacuum.

So I stood there, thinking. Should I walk over and say something? Should I ignore it? Should I simply go home? Have I really reached the age where I am having this internal conversation with myself? Ha.

I turned to the fella next to me, who was detailing a very fancy red shiny car and asked his opinion, “I’m thinking of saying something to the fella with the loud music… am I crazy?” To which he replied, “No! It’s obnoxious to me too!” Perfect. This guy was at least eight years younger than me, and he felt the same way I did.

So, I casually walked over to a light grey four-door car. It was modest, an older model with a few dents and scratches. The fella was leaning into the back seat and all I could see were his jeans and white shoes.

“Hi! Excuse me!” I said bashfully.

He popped his head out from behind the back seat passenger door. His arms were heavily tattooed from top to bottom and his head was shaved. The bass was still thumping super loud. My heart started pounding along with it.

I nervously smiled as I approached a little closer so he could hear me. “Hey! SO sorry to bother you…. am I super old if I ask you to turn that down just a smidge?”

He responded immediately. “No! Not at all. In fact, I was thinking it was kinda loud as well! Besides, how old are ya anyways, you aren’t that much older than me.”

I laughed, “I’m only 34, but I feel so old even thinking that I have to ask someone to turn down their awesome tunes.”

“I’m 29. You aren’t that old.” He paused for a second…“Honestly, when you walked over here, I thought I was about to get into so much trouble. I can’t believe how nice you were about asking me to turn it down. Thanks for your kindness! My name is Chris.”

“No problem Chris! My name is Shannon, nice to meet ya. And thanks for understanding!” I started to walk back to my car.

Thanks for your Kindness?

I couldn’t shake that thought out of my head. I politely asked him to turn his music down. Was I really being so kind that it was something he noticed? I wondered, what was Chris’s life like, and how often he had even experienced kindness without bias, prejudice or assumptions?

I started the vacuum still thinking about his words but a few minutes later he startled me as he poked his head into my car from the other side.

He said, “You know, you really made my day. I couldn’t believe how nice you were to me. I just got out of federal prison and moved to Kansas City since I was able to get a job here. And, people aren’t really nice to me.”

Whoa. My body tensed up and my mind was racing. Federal Prison. Did he kill someone? Was he in a gang? Who is Chris and what have I gotten myself into.

I put the vacuum down and walked around to the other side of my car. I smiled and said, “Well, I am super sorry I couldn’t handle the music today. But, I’m glad we were able to have a nice conversation!”

“Being in federal prison for 5 years, I was able to get my GED and learn skills to become a welder. I didn’t have anywhere to go so the state sent me to a halfway house in Leavenworth while I put a resume together and looked for a job. I’ve never had a driver’s license until now. And, I was able to get my own apartment for the first time! And a company in North Kansas City offered me a welding job with a decent salary. I can’t believe I’m actually making something of myself. And I can’t believe how nice you were about the music. Nobody else would’ve walked up to me let alone been so nice while asking me to turn it down.”

Nobody else would’ve walked up to him, let alone, been so nice to him.

I have been thinking about Chris’s words for the last four days.

Despite my raging headache, despite the fact that I’ve been on the road for three weeks straight, despite barely seeing my family or even getting caught up on sleep, I could have just driven away from that car wash and never said anything. Annoyed.

And there we were Friday afternoon. Two human beings sharing stories.

In a split second, I was able to remind Chris that there are nice people in this world.

And in a split second, Chris reminded me that we are all still human beings who need love and kindness.

We sat and talked for another 30 minutes about how he is trying to turn his life around, how I became a professional speaker, our families and how the world is kind of a crazy place right now.

I asked Chris if I could take a photo to remember this moment and he agreed. I asked if we could stay in touch and we exchanged information.

As I say in my speeches, I don’t care where you come from, what you have in your pockets or what your past is. All that matters is where you decide to take yourself and ultimately, as human beings we all crave connection.

As I reflected about every detail of my brief encounter with Chris, I looked down at the t-shirt I was wearing Friday and realized it’s the 2013 Oklahoma 4-H Shirt I received after speaking at their state conference. It says, “Waves of Change, Ocean’s of Opportunity”. I smiled so big.

As a world. As a humanity. We all deserve kindness. Life is too short. And we will never create “Waves of Change” if we don’t start somewhere.

Thank you Chris for our brief interaction. You reminded me of the biggest lesson of all in life and I hope you pass the kindness baton to the next person. 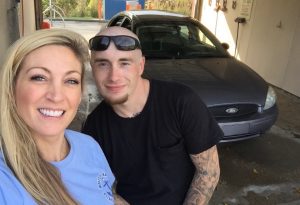 Patience is a Virtue

Honoring A Legacy
Scroll to top