I am honored to join the TED and TEDx community with my idea:

“Connected vs. Connecting: What living on a canoe taught me about relationships.”

Two years ago I was forced to leave behind all technology as I embarked on a two week adventure aboard a canoe in the Florida Everglades. On the trip (read about it here), I was paired with seven other millennials to learn about Situational Leadership. But, when I stepped foot on dry land again, I’d learned so much more. WE had learned so much more.

I have this theory that technology is eroding our ability to connect with each other. I felt it first hand when I was dropped in the Everglades with little more than a Nalgene bottle and two oars.

Technology had become our crutch and without it, we felt as though we’d lost innate skills to connect with others. Had technology caused us to forget how to form meaningful connections with others? Had it created chaos, disconnect and turmoil instead?

We live in a world where staring at a screen rules our every movement. It’s the social norm, and has the power to control how we communicate with others, for better or for worse.

Are millennials at a disadvantage because technology has been a part of their lives from the very beginning? If so, how do we shift away from “connecting” through likes, emoticons and friend counts? How do we develop skills that are more emotionally fulfilling?

In todays’ world, it’s much easier to form relationships through technology. It’s easier to swipe a finger advancing a relationship on a dating app than it is to have a face-to-face conversation. We wish people happy birthday, not because we’ve remembered, but because social media reminds us of their special day while we’re still lying in bed. Have we found greater meaning if someone “likes” a photo we’ve posted, than if someone gives us a hug?

The latest topics below have become the most requested seminars I offer.

Do you work with a group who might relate? Let’s talk! 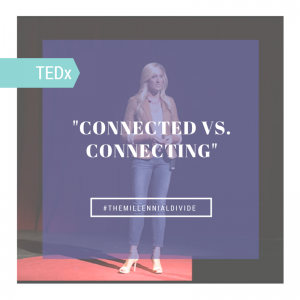 Building your Personal Brand for 2016
Scroll to top