About a year ago, I made a bold decision. After only being a member of the National Speaker’s Association for a short time, I decided to submit a proposal to present a workshop for my peers at the National Convention. I knew it was a long shot – there were people far more experienced or qualified than me.

Well, as the story goes, several months of anticipation later, I received the disappointing email letting me know I was not selected.

It’s funny, because even though I knew I most likely wouldn’t get selected, it still stung. Isn’t that so true in life? None of us want rejection… whether it’s a job opportunity, a potential love interest or even by our kids.

As much as it stings though, rejection has important value in our lives. If we don’t put ourselves out there, if we don’t “try” we never allow ourselves to fully become what we are meant to be. We may never actually accomplish the things we desire if we aren’t willing to take those chances in life.

I’ll admit, I was a little down on myself after receiving the rejection email. I was a bit jealous of my peers who were posting on Facebook that they had been selected. But after licking my wounds for a day or so, I decided I needed to move on to the next “risk” I was going to take. What was next? I was reminded of the motto I learned in 4-H, “To Make the Best Better”. It was time for me to move on and keep improving so I could continue creating the life I wanted.

A few months later, I received a phone call from someone I deeply respect and admire. John said, “Shannon, would you consider speaking at the National Convention for the Celebrity and Athletes Speaker Workshop?”

How could this be happening.

Of course I said yes, but I was terrified.

This was an even greater opportunity than the one for which I’d been passed over earlier in the year. As a former NFL Cheerleader, the audience would include speakers and athletes I look up to tremendously!

To speak in front of NFL Hall of Famers, Pro Bowl Stars, Super Bowl Champions, former NBA players, Olympians and even the first female to climb Mount Everest from both sides felt like the ultimate challenge! 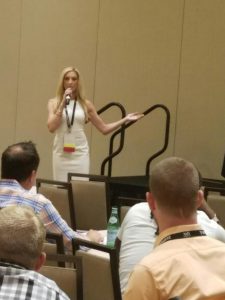 Looking back on that experience, I will be forever grateful. It was such a simple reminder that sometimes our “plan” isn’t always “The plan”. Sometimes we have to put ourselves out there several times before we strike gold. And sometimes, you just get lucky and land an opportunity you didn’t even know existed.

If you aren’t failing in life, you aren’t trying. Patience is a truly a Virtue.

PS: Something incredibly important to me in this photo that was taken right before I spoke for the athlete’s workshop, was that I could wear my 4-H pin on my name tag. I gave my first speech at the 4-H County Fair when I was 8 years old. 4-H introduced me to one of my greatest loves (speaking) at such an early age, so this was a full circle moment for me.

What risks are you taking today? And, do you have the patience to wait for your moment? Happy Monday!

Why You Should Use SnapChat

The Power of Kindness
Scroll to top